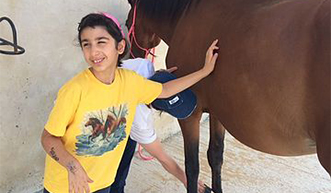 Hanadi is almost 9 years old. She is very adament about the “almost 9 years old” part! Today she stepped into her courage and dared greatly as she attempted to move a 1200 lbs sentient being a few steps to the right and a few to the left.

Appisonata, “Appi” for short, is a 16 year old ex-polo horse who was gifted to Hanadi and the two are forming a bond nobody could have predicted. Appi’s tender soft eyes follow Hanadi’s every move, and there are many moves! You see, Hanadi is not your average 9-year old. She has ADD and Cerebral Palsy, both which interfere in simple tasks. Not only mentally, with concentration, focus, and staying on task, but also her horse handling abilities (try doing everything with one hand/arm!)

Appi and Hanadi have many things in common. Appi has old injuries from the brutal game of Polo and doesn’t move as swiftly as expected. Neither does Hanadi with her Celebral Palsy, and coincidentally both have a “weak right side”.

Today though, there was no stopping Hanadi from handling Appi…she showed up promptly at 7am, to allow for working while it’s still cool. After establishing our safety bubbles (safe space) and checking whether Appi had sensitive and ticklish areas (using a special stick), Hanadi moved Appi backwards, forwards, sideways, and around.

The transformation from being a scared little girl who shy’ed away from horses a month ago, to handling her horse with such confidence and no fear, has been astounding! And in all that, Appi held the sacred space for Hanadi with such patience, respect and a big heart, as if she knows all too well that they share slight disabilities.

It was such a delight to witness the two in unison, like a dance, and to see the big smile on Hanadi’s face when she groomed Appi after the work.

Coach Lola witnessed the whole session too and is releasing a big yawn to illustrate how aligned everyone is! 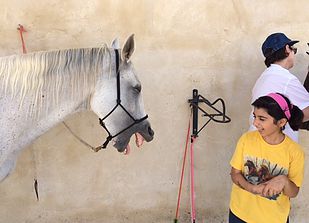 Manage Cookie Consent
Manage cookie preferences: To provide the best experiences, we use technologies like cookies to store and/or access device information. Consenting to these technologies will allow us to process data such as browsing behaviour or unique IDs on this site. Not consenting or withdrawing consent, may adversely affect certain features and functions.
Manage options Manage services Manage vendors Read more about these purposes
Settings
{title} {title} {title}